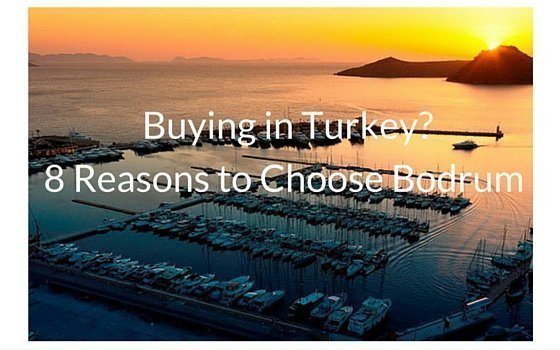 Bodrum is Turkey’s most western resort geographically and culturally.  Darren Edwards of Luxury Property Turkey has been living in Bodrum since 2002 and here he gives us his top reasons for selecting Bodrum over other vacation areas in Turkey.

Bodrum differs from the other resorts that line the Aegean and Mediterranean coastline, Bodrum is the favoured resort of well off Turks and is coined as the “furthest suburb of Istanbul”. It’s not an exaggeration to say that basically anyone in Istanbul and the other major cities in Turkey who are fortunate enough to own a second home select Bodrum first.

When in Rome do as the Romans do, when buying in Turkey invest where Turks invest!

2. Bodrum is authentic and spohisticated

Bodrum always had a reputation as an authentic and trendy hotspot and has also become a place that Turks dream of re locating to, whilst the peninsula has  great variety and has retained its bohemian feel.

The continued growth, urbanization and development means Bodrum has a very impressive infrastructure. With its own International Airport, and with some of the country’s top hospitals, excellent private international schools, and three large shopping malls all selling major international high street brands. Bodrum has been famous for its swish marinas, and these are supplemented by golf courses and tennis clubs giving plenty of  infrastructure needed for year round living!

And that is where it really differs from other sea side resorts that survive purely off foreign tourism in the summer months, Bodrum has a life, people work and go to school and the restaurants, cinemas, theatres etc., support the year round community, the peninsula has a great mix that can see you match the sophistication of almost anywhere plus quaint little villages where time gently passes by! In size Bodrum Peninsula is roughly the same as Dubai

One significant point that helps to retain its natural beauty is the zoning that controls the skyline the two storey rule is very strict as is the flat roof law so no multi level buildings that destroy so many other places.

The other interesting point is that unlike other resorts that are mostly occupied by one particular nationality as tourist operators drive a particular region! Brits to Fethiye and Marmaris, Germans to Alanya, Russians to Antalya etc, Bodrum has a healthy mix, first the Turks then the foreign community is very diverse from Northern Europe , Scandinavia to the Gulf States further afield like the USA. One thing to note is that whatever the nationality they all have one main thing in common and that is not being in a little version of their own country! All of this makes Bodrum the most cosmopolitan resort in Turkey, and with the domestic market being the most dominant we believe that anyone investing in the area will have a proper exit plan later if they decide to sell on, Turks will always buy here! It won’t be a case of trying to find another foreign buyer!

7. Trendy cutting edge design combine with some of the best sea views in the region.

Due to the sloping hills and mountainous landscape the area lends itself to sea views which is often high on the list of property investors, getting that dream view is a target that can easily be achieved, Renowned International architects such as New York based Richard Meier and Sweden’s Thomas Sandler have raised the bar level for innovative designs, this has spurred the creative designers and architects from Istanbul such as Emre Arolat to put their mark on the peninsula.

If you are a sailor then there is no place like it with three international marinas, and a truly amazing coastline surrounded by Greek Islands